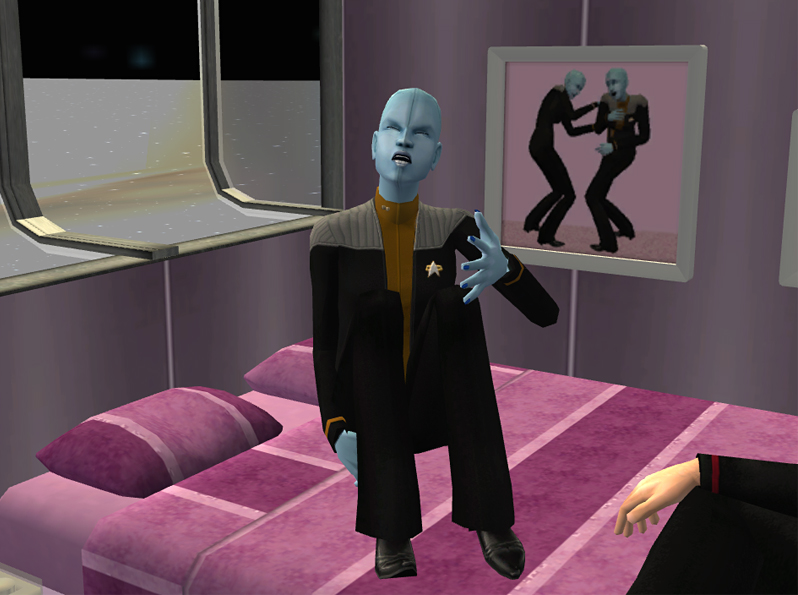 Somebody must always get the blame. 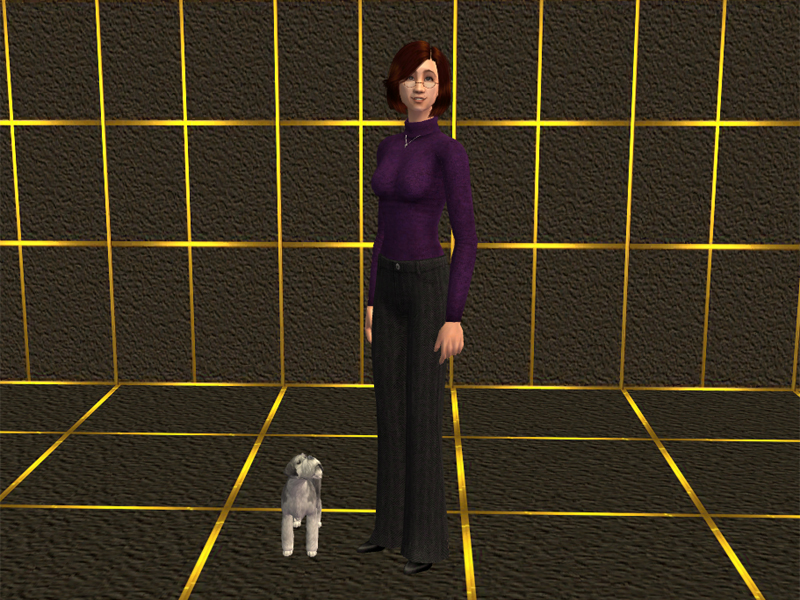 Back for another holonovel, are you? Great!

This story takes place at the same time as Subject to the Requirements of the Service, in 2374, so if you haven’t read that story, I suggest you do that first, before starting on this one – it’ll be easier for you to understand what’s going on that way.

But Mitana refused to answer; if she pretended she hadn’t heard, then maybe he’d leave…

For a couple of minutes, it was quiet outside. Mitana closed her eyes with a relieved sigh. He’d given up, finally… but then she heard footsteps, and a shadow fell on her. She looked up. 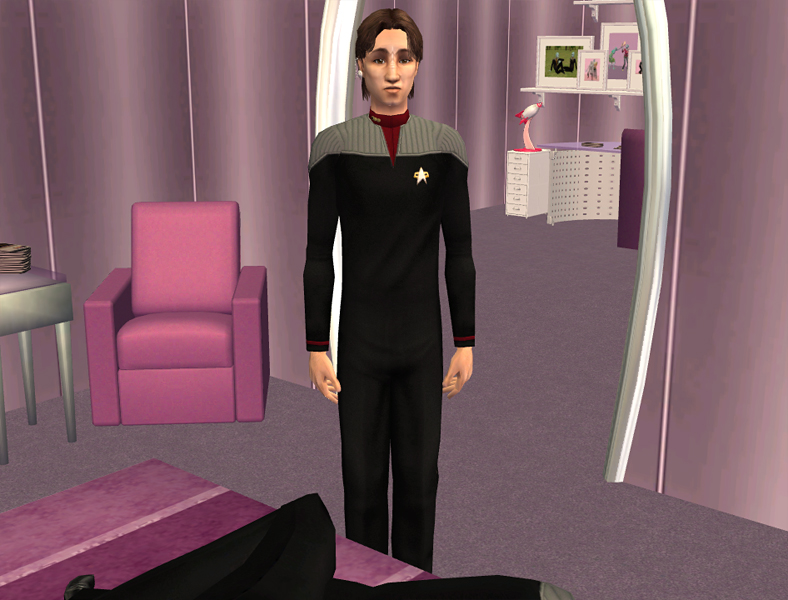 “How did you get in?” she asked flatly.

The uninvited visitor smiled. “I asked Security to override your lock.” Then his face became serious. “I wanted to see how you were doing.”

Mitana snorted. “How do you think I’m doing?”

“Like crap,” her visitor said with complete honesty. “I’ve been where you are, Mitana.”

Mitana grimaced. She had to admit that he probably was right about that; even though he never talked about it, she knew that Lt. Commander Joret Pohl had grown up in a Bajoran refugee camp. But she did not know what he had experienced there, and for that, she was very grateful. Reluctantly, she moved a little closer to the wall behind her so that Pohl could sit down next to her.

“You’ve been locked up in here for hours, you know,” Pohl said as he sat down on the bed. “Have you eaten anything?”

Mitana didn’t reply. “She ordered her to stay behind, didn’t she?” she instead said in a low voice. “That cold, unfeeling Russian she-targ ordered my sister to stay behind and die!”

Pohl shook his head. “The report by her XO says she didn’t. It says Sellia volunteered.”

“And you believe that?” Mitana asked incredulously.

“I believe that Captain Ivanova has trained her crew to tell the truth,” Pohl said. “And that they know she stands by the orders she gives.”

“Even if she’s murdered someone?!”

“Sellia was killed in action, Mitana,” Pohl said firmly, now all the Executive Officer. “And it was the Jem’Hadar that killed her – not her Captain.”

“It was still Ivanova’s fault,” Mitana darkly persisted. “You don’t end up in an ambush in the first place if the CO doesn’t mess up!”

Pohl shook his head again. “The intel they had said the area they were in was clear. They didn’t know-”

Mitana violently pushed herself up. “They’re covering for her!” she spat. “Can’t you see that? They’re even giving her a medal, for crying out loud! My big sister is dead, and Irina Ivanova gets a medal for it!” 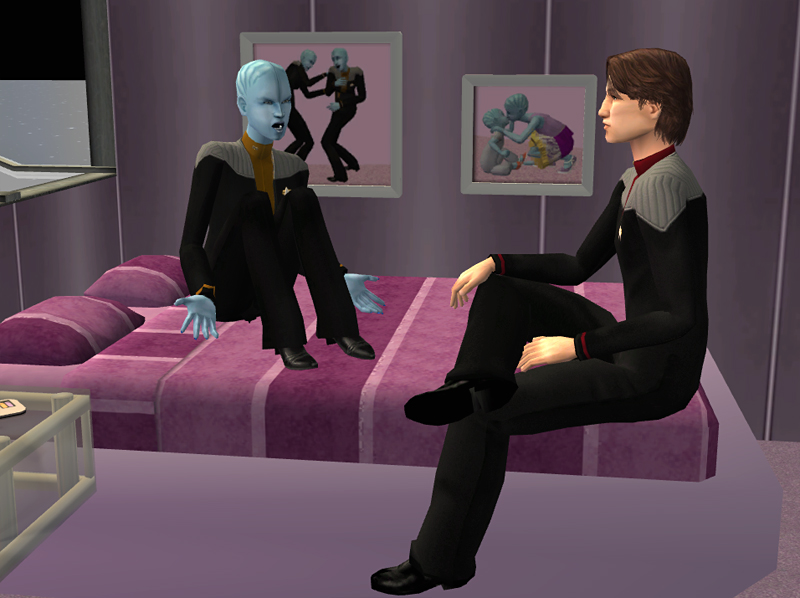 “No, Mitana,” Pohl said. “They’re not giving Captain Ivanova a medal because Sellia was killed, but because many others weren’t. Because she got her ship out of there, even though she was badly injured-”

Pohl didn’t say anything. He just looked sadly at his friend.

“You know what?” Mitana went on. “I don’t care if Ivanova really is a hero. So maybe she didn’t order Sellia to stay behind, but she didn’t pull her out of there, either-”

“Do you really think Sellia would have obeyed an order to get out in that situation?” Pohl said gently.

“But Ivanova didn’t even try to get her out of there!” Mitana screamed. “She just stood by and watched as my sister died!”

“But she is alive!” Mitana furiously went on. “Her people died, her Chief Engineer died, but she is alive! What kind of Captain is that, who lives when her crew dies? She’s supposed to go down with the ship!”

“But the T’Lau didn’t go down,” Pohl pointed out. “And her Captain might not live.”

“Oh, she’ll live,” Mitana snorted. “Hell will just take one look at her, and then it will spit her right back out!”

Pohl had to bite his lip not to smile; he could easily imagine Irina Ivanova face down a pah-wraith. But still:

“I know Captain Ivanova, Mitana. If she could have died instead of her crew, she would have.”

“You don’t have to be loyal to her any more, Pohl,” Mitana said darkly. “You don’t serve under her now. And she doesn’t deserve it.”

Pohl didn’t say anything; no matter what Mitana said, his old Captain would always have his loyalty. He also knew that Mitana was angry, and that she was hurting, and that she was looking for somebody to blame for her sister’s death. Right now, she probably needed somebody to blame – and Captain Ivanova was the most obvious target. But even though he could understand why she was reacting like she did, and even though he knew her grief was still too fresh and too raw to be reasonable, it worried him. He knew how relentless his friend’s anger could be, and he was afraid that anger would keep her from coming to terms with what had happened, but keep her accusing Irina Ivanova of murdering her sister. If it reached the wrong ears, that could get her into trouble – but telling Mitana that right now would only make things worse, especially if she believed the higher-ups were “covering for” the Captain of the T’Lau.

“Captain Ivanova isn’t your enemy, Mitana,” he instead said quietly.

Mitana snorted. “Sellia died under her command, Pohl – and Ivanova let her die. So maybe she didn’t put a phaser to Sellia’s head and pulled the trigger, but she still killed my sister just as surely as if she had. I’ll never forget that. And I will never forgive her for it.”

“Mitana…” Pohl hesitated. His friend wouldn’t at all like what he had to say next, but he wouldn’t be doing his duty as her superior officer if he didn’t. “Now isn’t the time, but when all this is over, I want you to see a counsellor-”

“So that they, too, can tell me to worship at Irina Ivanova’s feet?” Mitana snorted. “Thank you, but no thank you.”

“It wasn’t a suggestion, Lieutenant,” the Executive Officer told her in the no-nonsense voice he usually reserved for disobedient ensigns.

Mitana glared at him. “If that’s what you want, Commander.”

“It is.” Then Pohl grimaced. “Mitana… I hate to do this to you, but I didn’t just come here to see how you were doing. We’ve got new orders. I need you back on duty.”

Mitana grimaced. “Right. God forbid we give the troops time to grieve, right?”

“You’ll have time to grieve, Mitana,” Pohl said gently. “We all will. I promise.”

Mitana didn’t reply. Instead, she got up from the bed and closed her uniform jacket.

“Ready and able, willing to serve, sir,” she told her superior officer with ice in her voice and with an ironic flourish.

Pohl chose to ignore that. “Good,” he said instead. “I need to stop by Engineering first, but I’ll see you on the bridge.”

Mitana nodded. For a moment, it almost looked as if she was about to smile, but then her face darkened again.

“I’ll never forgive her, Pohl. You know that, right?”

Pohl didn’t reply. He knew there was nothing he could say that would make Mitana see things differently, at least not yet. “I’ll see you on the bridge,” he simply repeated. Then he made a gesture towards the doorway, and followed Mitana out of her quarters.

This site uses Akismet to reduce spam. Learn how your comment data is processed.